Ryan grew up in Indiana, but moved to Montana as a young teen.  While he’s not so much a traditional outdoorsman, he loves Montana and knew it would be a great place to settle down.  Meg was born and raised on the Connecticut shoreline near all of her extended family.  A lover of the water, 4th of July out on a boat, and family picnics, Connecticut is near and dear to her heart.

Ryan and Meg met as sophomores at Franciscan University in Steubenville Ohio and have been just about inseparable since.   They got engaged at the beginning of their senior year and married a month after their graduation.

They lived outside of Washington DC for a couple years.  Meg worked in youth and young adult ministry while Ryan started his own business.  They loved experiencing all that DC has to offer.  Always being open to life and wanting a (big!) family, Ryan and Meg hoped to start a family shortly after getting married. For the 5 years that followed, they experienced infertility.  It was a time of great suffering, but it stretched them in their ability to love one another and trust in God’s goodness and providence.  The fruits of such an intense trial as infertility have been a tremendous gift and taught them many  lessons.

It was during this trial where God cultivated a love for adoption in Ryan and Meg’s hearts individually and as a couple.  After moving to Bozeman, Montana in 2008 they pursued domestic open adoption.  They received a match in late 2010, but 3 weeks before the birthmother’s due date, they discovered they were pregnant and were no longer able to adopt.  It was a difficult time, since they wanted to build their family by adoption, but the gift of their son, Benedict, is a tremendous joy.  They are thankful for him everyday! 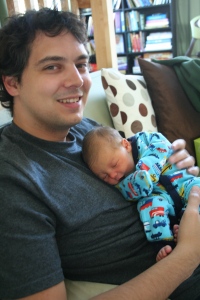 Still, they knew adoption would be a part of their family.  When discovering Reece’s Rainbow, one little boy stood out to Meg.  There was something about him and he weighed heavily on her heart, so she asked Ryan to pray about adopting him.  It was definitely outside of their comfort zone.  They hadn’t planned on international adoption, let alone adopting a child with Down Syndrome and a congenital heart condition, but they wanted to be open.  They discerned this adoption throughout Lent and in the Easter season they had their answer.   Trusting in God and relying on His grace, they are excited to go get their son, “Justin”, out of that orphanage!  They are so happy that they are a part of God’s plan for Justin’s life and that he’s a part of theirs.

** Time to finally update this page!**

We learned 2 weeks prior to our travel date that “Justin” was unavailable due to a discrepancy in his paperwork.  We were told that our dossier would most likely expire before this problem was worked out, if it was ever worked out.  We decided to move forward, realizing that there are many “Justins” that needed families.  We decided to adopt “Peyton”.  This was his original photo:

This is the photo taken by another family in September of 2012 that broke my heart:

We named him Paul.  Here he is in December 2012 after being home for exactly 1 month!